This season is probably going to be the best season in the history of the Walking Dead series. I always thought that the third season was the best, I guess I was wrong. The season finale of the fourth season ended with a very nice cliffhanger, and it’s where the first episode of the fifth season took place.

Will there be spoilers in this review? A bit, but I’ll try to keep it to a minimum.

If you guys have read moviepilot.com’s post about this season of The Walking Dead, then you might know the things that I am about to say.

1. Are they cannibals? -Yes

2. Are they ever going to make it out of Terminus? -Yes

3. Is anyone going to die? – A whole lot of people will die.

4. Anyone in particular? – You’ll have to find out.

5. Is anything going to happen to Judith? -No.

7. Garrett?- He got shot. But still alive, as shown in previous teasers

I just love the season premier. From the very start of the episode till the ending, it will leave you breathless. The episode is so action-packed, and yet, it will still leave you with questions yet to be answered.

And before I get to say anything else, I’ll end it right here. Otherwise, “I might screw up with the wrong people”.

If you want to find out more about the episode, go watch it yourselves! or you can just go to Wikipedia and read the synopsis yourself.

Also, wait until the end of the credits. A fan favorite will be making a comeback.

The CW has just released a trailer for Arrow’s upcoming third season and it is just full of epic proportions!

The trailer starts off with scenes from season 2, like a flashback.

Going back to the present day, they show Oliver Queen talking with other board members in an office, which I think is Queen Consolidated. This just proves that after Isabel Rochev and Slade Wilson’s takeover of the company (until Isabel died and Slade was apprehended), Oliver was able to take it back from them and was able to come back as its rightful CEO. And also in another scene, it is  shown that Laurel and Oliver are now business partners.

Cut to the next scene, as Oliver and Felicity are walking towards the office inside the building, they are introduced to Ray Palmer (Portrayed by Brandon Routh) by another business associate. Palmer also says that he is a big fan of Queen Consolidated.

Oliver then is seen in his secret hideout talking to Diggle and saying that “I can’t have you in the field anymore”, which angers Diggle and says that Oliver would be dead 100 times if it wasn’t for him.

We also get to see Caity Lotz back as Black Canary.

Oliver is seen next asking Felicity to go out and have dinner with him and she agrees (how do I know? they’re both shown talking to each other over dinner). Oliver then explains to Felicity that he wasn’t always on the island. Cue to a flashback in Hong Kong where he is shown running in a market while trying to get away from someone chasing him. It is shown later that Amanda Waller has threatened to kill Oliver if he ever tries to escape her again.

In one scene, we get to see Arsenal shooting a motorcycle that was trying to get away. I just didn’t notice if he was wearing his new costume or if he was still wearing his old red hoodie. Nevertheless, it was still awesome to see him shoot at least one arrow.

As the trailer comes to an end, we see Oliver in his hideout looking down on Felicity who was lying down on the table with her face all bloody and unconscious.

And then we get to hear Oliver say his famous tagline from season 1:

“You have failed this city”

This season has got to be more epic than the past two seasons. I just have a few questions in my mind:

1. Will we get to see Slade again?

2. Will we get to see the League of Assassins again?

3. Who is Oliver up against in this season?

4. Will Roy still be a pain in the ass like last season?

5. Will we still see the Suicide Squad?

6. Are they finally going too include Harley Quinn in the show?

If you want to see the trailer yourself, watch the video below and tell me what you think of it by commenting below! Enjoy!

All geared up and ready to go, Colton Haynes is back to reprise his role as Roy Harper for the third season of the hit TV show, “Arrow”. But seeing him play Roy Harper again is just boring, right? That is why the CW has released a brand new pic of him sporting his new costume as Arsenal, which includes: A red leather jacket (similar to the Arrow’s outfit but.. RED.), also a red domino mask, and of course his own “red” bow. 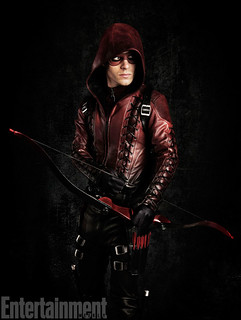 I can’t wait to see more of Roy Harper dressed up as Arsenal! Get to see him and the other members of Arrow back on the boob tube this October for its third season.